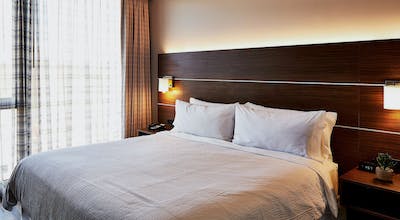 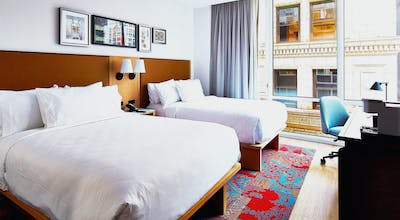 When you're in New York City, you feel like you're crammed into a very tight space. That's because this is one of the most densely populated cities in the world. Geographically speaking, this is not an enormous piece of land, but it seems that every square inch of it has been maximized to accommodate as many people as possible. According to the United States Census Service, more than 27,000 people live in the New York area for every square mile of land. I have visited the city often over the years, and I've often wondered if there was any part of the Big Apple that felt like it was a bit separated from all of this hustle, bustle, fun and excitement. I heard about a neighborhood called Sunset Park in Brooklyn not too long ago, and I was told that this was a little piece of change relative to the rest of Brooklyn and New York. I had 24 hours to spare one day, so I decided to check it out. I wasn't worried about finding a place to stay, as I travel with HotelTonight, so I'd find a Sunset Park Brooklyn hotel room as soon as I needed one.

One of the first things that I noticed when traveling from Manhattan to Sunset Park was the time it took to get from one place to the other. This is a good trip from what many consider the middle of it all, so it definitely feels like you're in another city when you get to this community. When you do get here, you also tend to notice that the pace of life is a bit different than what you're used to in the more 'famous' parts of New York. This is a true family-oriented community.

Another interesting aspect of Sunset Park is that this really is one of New York's quintessential melting pots. As I walked around the community, I noticed a very strong Asian influence. As I walked a bit further, I saw a Caribbean culture displayed prominently in windows and storefronts. I turned a few corners and noticed that there were quite a few families whose ancestors had originated in Europe as well. That covers a lot of different places across the globe – the Caribbean, Asia and Europe – but it all feels like it fits together quite nicely.

When you see these types of cultures in a neighborhood, you can bet that there is going to be incredible cuisine available. I decided on a Mexican place, as I heard about the tacos they served. I ordered a few of them and quickly understood how they could garner such a following. The carne asada was cooked to perfection, and the carnitas melted in my mouth. The warm corn tortillas were in no way chewy or tasteless, either. It was a tremendous dinner.

After such a filling meal, I was ready to get some rest. I grabbed my phone and opened my HotelTonight app. It helped me book a Sunset Park Brooklyn hotel room in seconds. I couldn't wait to fall into my bed and sleep the sleep of the just after the wonderful day I had just enjoyed.