Find a Hotel Tonight in
Frankfurt 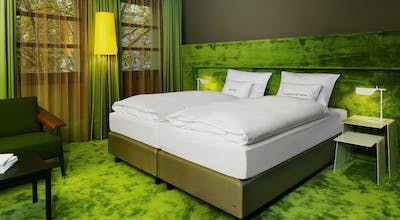 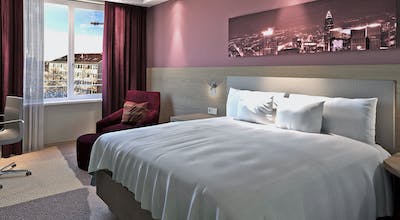 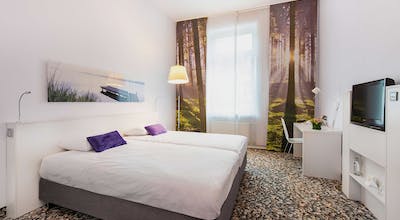 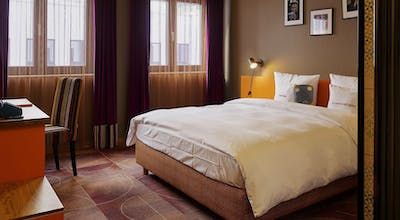 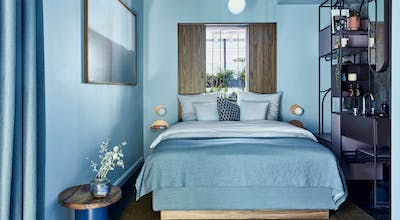 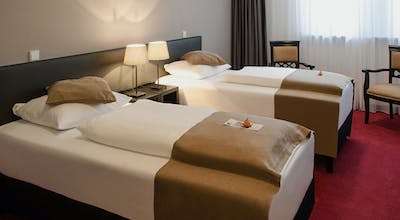 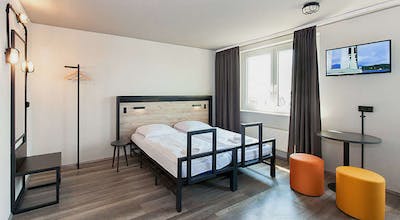 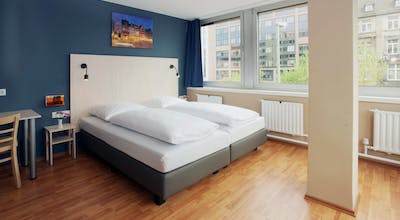 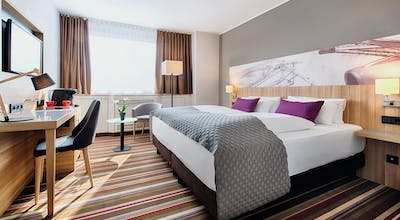 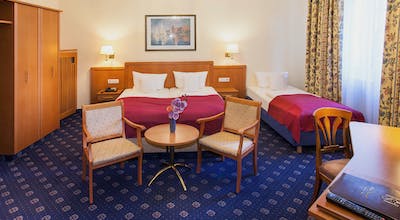 What Guests are Saying About Frankfurt 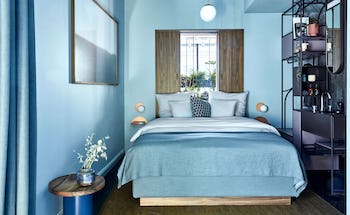 Lindleystraße 17, Frankfurt/Main
93%
liked it
(
132 Ratings
)
I travel the world year round and this hotel blew me away. Vegas menu, green room, fun and unique design. I highly recommend. One of one.
Yogev B. 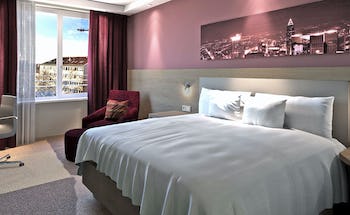 Grusonstrasse 4, Frankfurt
95%
liked it
(
170 Ratings
)
The hotel room was very nice. All the amenities were great. The bed would be the only thing I would complain about. It was very hard.
Brian P.

As the finance hub of Europe, Frankfurt's skyline glitters with skyscrapers and its streets swarm with busy professionals. Despite its role as a business center, this German city is also very traditional, and you can get a taste of the city's rich history and culture no matter where you are in Frankfurt. I recently traveled to Frankfurt on a quick business trip, and within hours of arriving, I had become enamored with the charm and the heart of this diverse European city. As my time in Frankfurt came to an end, I realized that I had barely been able to step outside of conference halls and offices, and I badly wanted to see all that Frankfurt had to offer. So I made a spontaneous decision to change my flights and turn my business trip into a mini vacation.

To make my impromptu travel changes possible, I relied on HotelTonight to find a great last-minute hotel in Frankfurt. It took me less than two minutes to book a room at a quaint boutique hotel in the heart of Frankfurt's Old Town, so I packed up my clothes and headed out to experience the true heart and soul of Frankfurt.

There's a good case to be made that Frankfurt's Old Town (known as Altstadt) is the prettiest old town in Europe. It's hard to think otherwise once you step into the Romerberg, the Old Town public square that looks like something out of a fairy tale. This picturesque square may be a hot spot for tourists looking to snap some pretty photos, but it's also an area frequented by locals. The surrounding streets of the Old Town are just as idyllic, and this beautifully preserved historic center is home to many important buildings, such as the Old Town Hall, the New Town Hall and the St. Nicholas Church. You can't get a good beat on Frankfurt without visiting the Old Town, so make sure to spend some time immersed in the historical heart of this city.

Frankfurt has some of the best museums in all of Europe, and most of its museums are located in the Museum District (or the Museumsufer). Located on the left bank of the River Main, the Museum District features a dozen different museums, and you could easily spend an entire weekend jumping from one museum to the next without seeing everything this district has to offer. Since I only had a couple of days in Frankfurt, I knew I had to be selective with my museum choice. I ended up visiting the Museum of Applied Art, but other popular museums on this street include the Museum of Ancient Sculpture, the German Architectural Museum and the Film Museum.

For lunch, I decided to head to one of the locals' most beloved dining areas--Fressgrass. This pedestrian street is actually named Grosse Bockenheimer Strasse, but it has been given the nickname, "Pig-Out Alley," because of its extensive selection of great eateries. As I walked up and down "Pig-Out Alley," I passed all types of food spots, with everything from delicatessens to fast food joints to upscale restaurants, and I quickly understood why the street got its nickname.

Since the Hauptwache is one of the most famous plazas in Frankfurt, I knew I couldn't visit the city without meandering through the Hauptwache. The plaza connects several of the city's best shopping streets, such as Zeil and Steinweg, so it's an ideal place to visit if you want to spend an afternoon popping in and out of stores. While I personally didn't feel the need to spend hours shopping, I did enjoy wandering down the streets and soaking in the hubbub of activity from businessmen, shoppers and tourists.

Okay, I'll admit it--I'm a sucker for pretty plazas, and Frankfurt's Opera Square is one of my all-time favorite squares. The Old Opera House is the heart of this picturesque square, and this beautiful building is particularly breathtaking at night. This square has a spacious, open feel, so it's a great place to just take a break and people watch after a long day of exploring this incredible German city.

In just a few days, I was able to understand why Frankfurt is consistently ranked as one of Europe's best cities to live and work. This German city has a very upbeat, modern feel, yet is also steeped in history and architectural beauty. There's so much to do and see in Frankfurt, I felt like I barely scratched the surface during my short trip. Fortunately, I know that I can always plan another last-minute getaway to Frankfurt thanks to HotelTonight, which makes it so easy to book great last-minute hotels in cities all over the world. And if you're similar to me and like being flexible when it comes to travel plans, HotelTonight will become one of your best travel resources.

How many hotels are in Frankfurt?

There are 59 hotels in Frankfurt available from Hotel Tonight.

What are most popular hotels in Frankfurt?

What are the best hotels in Frankfurt?

How much is a hotel room in Frankfurt?

In the last 30 days, HotelTonight prices in Frankfurt have been as low as $40.43, though the average room costs closer to $102.3 per night.

What is the cheapest time to go to Frankfurt?

Our hotels prices have varied throughout the year from $79.03 to $234.84 On average, we've seen the cheapest room prices in December

Which hotels in Frankfurt have a pool?