Find a Hotel Tonight in
Ketchikan

I've been to Alaska many times, but as many times as I've visited I know full well that unless I actually live there, there's no way I'm ever going to experience this vast land of wonder in its entirety. Regardless, I've made it sort of a mission of mine to see as much of Alaska as I can, whenever I can. I'm one of those travelers that likes to see things from the perspective of the people who live in a particular place. I went on a cruise with my parents when I was younger. One of the places we stopped was a community called Ketchikan. We were only there for a few hours, but I remember that it was beautiful. Recently, I had an opportunity to head back there based on several random circumstances falling into place. I had to leave immediately, though, so all I had time to do was grab a bag to spend 24 hours there. That was fine with me, though, as I have the HotelTonight app. I'd be able to book a Ketchikan hotel room in a matter of seconds as soon as I was ready to crash.

As soon as I got to Ketchikan, I was immediately taken back to when I was hear as a child. That's because the downtown part of the community is strikingly beautiful. It's the quintessential frontier town, nestled between majestic mountains and a breathtaking coastline. The buildings are colorful and quaint, the streets are small and clean and the local residents are not only quite familiar with each other, but they're also friendly. You can tell that they're used to welcoming visitors who appear regularly from the cruise ships that dock nearby. I spent a couple of hours just walking around and talking to people.

In how many communities can you say that it's only a short walk to check out some whales doing whale-type things? Not many that I can think of, that's for sure, but Ketchikan is one of them. Less than a mile from downtown is a spot along the coast that is set up for people to watch the whales breach, swim and live in their natural habitat. There are picnic tables there and binoculars are even provided. This seems like a 'touristy' thing to do, but I noticed that there were quite a few locals there.

When you're in this part of the world, you're going to have a lot of seafood options for dinner, and that was just fine with me. I asked a couple of people about where to go, and they told me about a place that had been there for decades. I walked in and the entire restaurant was decorated and built with wood. I had some lovely clam chowder in a bread bowl, and the crab legs I had seemed to be as long as my arm. I sampled some local beers as well, and the entire meal was delicious.

After such a great meal and such a nice day, I was ready to get some sleep. I opened my HotelTonight app and booked a Ketchikan hotel room almost instantly. I was walking distance away, so I headed over there and fell asleep almost as quickly. It had been a great experience seeing this place. 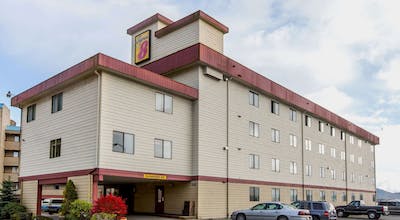