Find a Hotel Tonight in
Alaska

Where to stay in Alaska

What Guests are Saying About Alaska 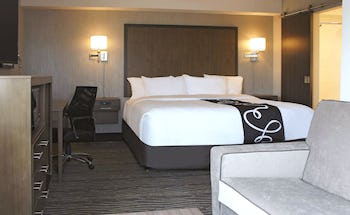 3501 Minnesota Dr., Anchorage
96%
liked it
&nbsp; (
89 Ratings
)
the bed was soooo comfortable. The shuttle was going to give me a ride to the hospital where my daughter is having surgery. Turned out it had to be serviced but they gave me a voucher and called a Cab... Show More
Diane W.

When you simply say the word 'Alaska' you're bound to prompt some very interested and interesting responses from people. Despite the fact that Alaska is one of the 50 states, it is still a wonder and a mystery to a large number of people. I was part of that group until recently, as I had never been there. When I decided to take a trip there to explore, I wondered if my usual way of traveling would work. That's because I'm one of those people who tends to wander and just go where the day, the road, the stars or whatever else takes me. I wasn't sure that would be such a good idea for Alaska, as there had been times in previous travels when I could not find a place to stay. That's probably not a good idea there, so I thought. I needed to be sure that I had the ability to find an Alaska hotel room when I needed one.

I searched for apps that help people find last-minute hotel rooms. I found one called HotelTonight and decided to give it a try. I searched for Alaska hotel rooms and was quite impressed with the number of options that were available. I decided to try to book a room for the first night there just so I could be sure that was handled. To my amazement, I had a room chosen, booked and confirmed within seconds. I was all set, and I was confident that HotelTonight would serve me well during my travels to Alaska. All I had to do now was some research relating to interesting facts about this beautiful place, as I wanted to have some idea of where I would go and what I would see. Regardless of how all this played out, I was definitely in for an adventure.

Alaska Is Home to Heights Unmatched

There are some seriously high mountain peaks in North America. This continent is home to the Rockies, the Grand Tetons and other mountain ranges that are as majestic as they are famous. What I did not realize until I got to Alaska is that this state is home to 17 of the 20 highest peaks on the continent, led by Denali, which is the highest at more than 20,000 feet above sea level. That's nearly 4 miles up in the air from the shores of the ocean. It was quite something to see these mountains and how they shape the landscape.

Alaska Is the Land of 3 Million Lakes

Minnesota is known around the United States as the 'Land of 10,000 Lakes' and for good reason--there is a lot of fresh water there. However, Alaska is home to approximately 3 million lakes, or 300 times as many as Minnesota. I saw quite a few of them while I was there, and I also spent time hiking along some of the 3,000 rivers that run through Alaska. This is a state that depends on water for many different reasons, but what I got out of it was an extreme appreciation for beauty and untouched nature, not to mention some great fresh seafood.

Alaska Is the Land of Glaciers

Throughout my life, particularly when I was younger, when I heard about glaciers I immediately thought of prehistoric times and the Ice Age. I never really considered that they still exist today all over the world. I had never seen a glacier until I got to Alaska, and they are not that hard to find there. That's because there are more than 1,000 of them there, covering about 5 percent of the land mass of the state. More than half of the glaciers that exist in the world today call Alaska home.

Alaska Is Not Densely Populated

One of the things that strikes you when you see Alaska for the first time is that there really are not that many people here. The cities in Alaska, including Juneau, Fairbanks, Anchorage, etc. are relatively small compared to other places in the United States. An analysis that was done a few years ago stated that if New York had the same population density as Alaska, fewer than 20 people would live in Manhattan. You realize that this is the case when you drive or walk around, as you can go for hours on the highway without seeing another human being. It's a totally unique experience.

HotelTonight – Alaska Hotels at the Ready

Given the sparse population of Alaska and the distance between the cities or any form of civilization, I was quite glad that I discovered HotelTonight before I got there. This powerful, handy app provided me with the reach I needed to find an Alaska hotel room when I needed one. I loved my time in this beautiful state, and I loved the fact that in the future, hotel rooms would never be a worry with HotelTonight at my side.

How many hotels are in Alaska?

There are 123 hotels in Alaska available from Hotel Tonight.

What are the best areas to stay in Alaska?

Some of the top areas in Alaska to stay are:
Juneau
Ketchikan

What are most popular hotels in Alaska?

What are the best hotels in Alaska?

How much is a hotel room in Alaska?

What is the cheapest time to go to Alaska?

Our hotels prices have varied throughout the year from $124.09 to $294.79 On average, we've seen the cheapest room prices in September

Which hotels in Alaska have a pool?