Find a Hotel Tonight in
Marinette 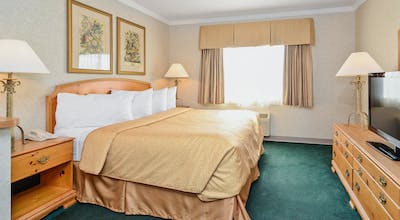 When people think of Wisconsin, most will envision historic and lovely cities such as Milwaukee and Madison. Others will think of the Green Bay Packers, cheese and beer. While all of these are hallmarks of the Dairy State, there are also vast swaths of land, particularly in the northern regions, that are largely unexplored by travelers these days. That's a good thing for me, but it's really too bad for anyone who has not seen this part of the world. It's bucolic and serene, but it's also warm and friendly. I recently wound up in a small town known as Marinette for a day. It's somewhat out of the way, so to speak, as it's in the northeastern part of the state near the border with Michigan. The circumstances that led me there for 24 hours are not important, but it was important that I had stumbled onto an opportunity to see how people live in the northern woods of a beautiful state. What made it even better was that I was, as always, traveling with my HotelTonight app. I was able to book a Marinette hotel room in seconds. I couldn't wait to see what there was to see.

One of the first things you notice when you start experiencing Marinette is that the people there definitely like to spend their time outdoors. If I lived there, I would probably have the same passion for it. The Peshtigo River runs through town, and Green Bay, a major bay of Lake Michigan, is also nearby. When you drive around town, you see a lot of fishing boats and trucks loaded with fishing gear. Hunting is also extremely popular here, and I took some time to walk through the woods near town and along the water. It was beautiful.

Wisconsin is known for many things, but wine is not one of them. Imagine my surprise, then, when I heard about a local winery that was known for its quality product. I stopped in and had a bit of a tasting with the staff. They could not have been nicer, and the same goes for basically everyone I talked to that day. The wine was made from local grapes and the building itself was somewhat rustic. This was not like a winery you'd find in France or Italy, but it was quaint and quite lovely.

There is one other thing for which Wisconsin is known, and that's cows. Those cows produce some of the best beef and milk in the world, and some places know how to turn those things into delicious meals. I heard about a burger joint right near the middle of town that also had incredible malts. I stopped in and immediately smelled the open fire. I had two cheeseburgers and a chocolate malt, and it was an unbelievable meal. I may as well have been sitting in a diner in the 1950's, and you could tell the place was a local institution.

After such a full day and a big meal, I was ready to call it a night. I made my way to my Marinette hotel room, happy that I had been able to see this place and book my lodging so easily. HotelTonight is an app that will travel with you everywhere, and its benefits are hard to measure. I fell asleep appreciating the experience of that day.

How many hotels are in Marinette?

There are 9 hotels in Marinette available from Hotel Tonight.

What are most popular hotels in Marinette?

Among our most booked hotels in Marinette are:
Econo Lodge on the Bay
Best Western Riverfront Inn
Independence Stay

What are the best hotels in Marinette?

How much is a hotel room in Marinette?

What is the cheapest time to go to Marinette?

Our hotels prices have varied throughout the year from $95.81 to $140.11 On average, we've seen the cheapest room prices in April

Which hotels in Marinette have a pool?

There are 4 hotels with pools in Marinette. Some of them are:
Country Inn & Suites by Radisson, Marinette, WI
Best Western Riverfront Inn
Days Inn by Wyndham Iron Mountain