Find a Hotel Tonight in
Indiana

Where to stay in Indiana

What Guests are Saying About Indiana 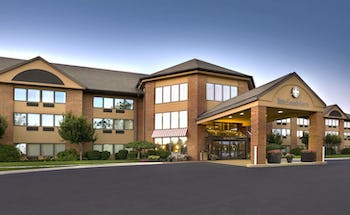 The Inn at Saint Mary's 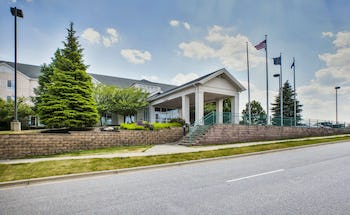 501 Gateway Boulevard, Chesterton
94%
liked it
&nbsp; (
245 Ratings
)
Hotel was clean and small so not many people. Situated in a great plaza with different food options, gas, etc. Pet friendly too with a small dog park area on the side. Great sleep with great beds. Exc... Show More
Inara C. 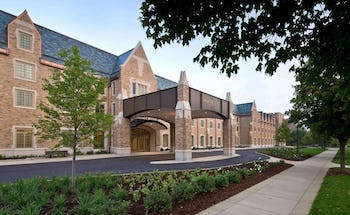 1399 Notre Dame Avenue, South Bend
100%
liked it
&nbsp; (
68 Ratings
)
This is definitely nicer than your “basic” level you have them listed as. The lobby is beautiful and well appointed with a great restaurant and while the rooms are simple, they are much much nicer tha... Show More
Emily B.

When I travel, I like to pick a place on a map and go explore it. It sounds overly simple, but in reality it's a more stimulating way for me to get to know a place. I will never be one who plots out every minute of every day on a schedule before traveling somewhere. I had never been to Indiana, but had family from there and they always talked about what a lovely place it was to live. I wanted to find out for myself, so I took a few days off and booked a flight to Indianapolis. I wasn't going to stay there for long, as this is a big state with a lot to see. The only potential problem I foresaw was that I didn't know where I'd wind up on any given day, so I'd need to be ready to find an Indiana hotel room quickly.

I had encountered this problem before and if you get stuck your night is not very pleasant. Since we all go everywhere with our phones these days, I grabbed mine and searched the apps for one that would help with finding last-minute hotel rooms. I found one called HotelTonight and searched for Indiana hotels. I was quite surprised not only at the quantity of choices available, but also the quality and the reasonable rates. I booked a room in Indianapolis for the first night I was there, as I knew that much about my trip and not much else. Beyond that, I did some research on interesting facts regarding Indiana, as I have found that this is a good way to at least loosely guide where I visit. I was excited for my adventure.

Indianapolis Is a Beautiful City

As I said, I had never been to Indiana, and since I flew into Indianapolis I thought that this was the most logical place to start. I walked around downtown for a bit to see what the city's vibe was like, and I found a busy, clean and friendly place with people who were more than willing to tell you about Indianapolis and the rest of the state. I saw the Indianapolis Motor Speedway, which was a thrill for me as I've watched the Indianapolis 500 since I was a child and several other historic sites. It was a great way to get my trip started.

I enjoy photography, and one of my favorite types of photos is one that captures the look of something bucolic. I am not sure there is anything more bucolic than covered bridges. I didn't know this until I got there, but Parke County is home to the highest number of covered bridges in the world. I'm told that there are 32 of them overall. I thought that a great way to spend the day was to explore as many of them as possible, and I can't wait to put some of those beautiful photos on my wall to enjoy in the years to come.

Indiana Is Home to Santa Claus

Children around the world believe that Santa Claus lives on the North Pole, and while that may be correct depending on whom you ask, Indiana has a city that's called Santa Claus. It embraces the name fully, and every year thousands of letters to Santa Claus are delivered here instead of to the North Pole for obvious reasons. What's even better is that many claim that a large number of these letters are answered. This is one of those quaint and lovely little towns, with a population of around 2,500 people, that you could get lost in exploring despite its small size.

Indiana and the Underground Railroad

There is a lot of important history that is related to Indiana. One of the most overwhelming I experienced was when I visited the city of Fountain City, which is home to fewer than 1,000 people. How could such a city be so historic? It used to be called Newport, and during the 19th Century this town was considered the "Grand Central Station" of the Underground Railroad, the system in which people helped slaves escape to freedom. It's not often that you get to walk around in such an historic place, and I was honored to do so here.

As I made my way to the airport in Indianapolis for my flight home, I found myself looking at the photos on my phone. I had seen an awful lot here and I had learned even more. Indiana is a great place and one that I was sure I'd visit again. I would do so with the help of HotelTonight, as it helped me find Indiana hotel rooms almost wherever I was, and it was ready to help me find lodging not weeks or days later, but for later that night. Wherever I go in the future, I would do so with HotelTonight at my side.

How many hotels are in Indiana?

There are 712 hotels in Indiana available from Hotel Tonight.

What are the best areas to stay in Indiana?

Some of the top areas in Indiana to stay are:
South Bend

What are most popular hotels in Indiana?

What are the best hotels in Indiana?

How much is a hotel room in Indiana?

In the last 30 days, HotelTonight prices in Indiana have been as low as $47.8, though the average room costs closer to $116.52 per night.

What is the cheapest time to go to Indiana?

Our hotels prices have varied throughout the year from $110.54 to $136.74 On average, we've seen the cheapest room prices in February

Which hotels in Indiana have a pool?