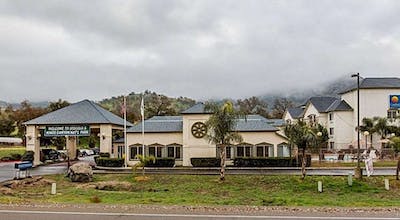 I had just spent several days at Death Valley National Park. It was the trip of a lifetime, and one that I had looked forward to for many years. I drove out of the park in a state of complete euphoria, and I couldn't wait to show people all of the photos I had taken and all of the memorabilia I had collected. I was headed up the highway towards the Bay Area, where I'd continue to drive home to Seattle. Unfortunately for me, not long after I was leaving the park, my car broke down. This was clearly not the best place to encounter car trouble, but I felt lucky that I was near a small community of Lone Pine. I had my car towed there, and the mechanic told me he'd need 24 hours to get it back on the road. All in all, things could have been worse, and I decided I might as well use that time to explore this community. I wasn't concerned about lodging, either, as I have HotelTonight on my phone. I'd book a Lone Pine, California hotel room as soon as I was ready to sleep.

I have to admit, as frustrated as I was with the situation overall, the beauty of the town of about 2,000 people and the breathtaking surrounding landscape changed my mindset almost immediately. Downtown Lone Pine was all at once a mountain town, a frontier town like something out of the Old West and the quintessential Americana. The people all seemed familiar with each other, which made sense for obvious reasons, but I could not believe how friendly everyone was when I told them my story and asked them some basic questions about where to go around there.

Lone Pine sits between more mountains than I could count, but one of them is Mt. Whitney, the tallest mountain in the Lower 48. I got a ride to the Mount Whitney Trail, and I immediately jumped out of the car and started hiking, which is one of my favorite pastimes. I thought I was ready to see what there was to see after hiking in Death Valley, but this was different. The views from such high altitudes were stunning, and I spent more time taking photos than I did walking. There was no way I was going to finish up at the top of the trail, but after a few hours I was ready to head back to town.

After all of that exercise, I was in the mood for a beer and a steak. A nice lady downtown told me about a place that had both, so I went there for dinner. It was a big restaurant with a relatively low-key approach to decor, but they didn't fool around with their steaks. I had the strip, and it was seared on the outside and tender and juicy on the inside. The fries were also nice and crispy and the beer was ice cold.

I was more than full and quite exhausted after all that hiking in the altitude. I opened my HotelTonight app and booked a Lone Pine, California hotel room in seconds. It was mere blocks away, which was great because I was ready for a shower and a deep sleep. Tomorrow I'd be back on the road, and I was happy that the day had turned out so nicely after such a rough start.

How many hotels are in Lone Pine?

There are 1 hotels in Lone Pine available from Hotel Tonight.

What are most popular hotels in Lone Pine?

Among our most booked hotels in Lone Pine are:
Best Western Plus Frontier Motel

What are the best hotels in Lone Pine?

Some of the top rated HotelTonight hotels in Lone Pine are:
Best Western Plus Frontier Motel

What is the cheapest time to go to Lone Pine?

Our hotels prices have varied throughout the year from $91.82 to $91.82 On average, we've seen the cheapest room prices in December

Which hotels in Lone Pine have a pool?

There are 1 hotels with pools in Lone Pine. Some of them are:
Best Western Plus Frontier Motel