Find a Hotel Tonight in
Sochi 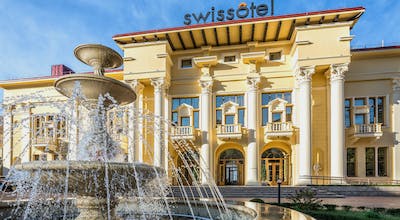 The 2014 Winter Olympics put Sochi on the map. Suddenly, everyone knew about the Russian town of Sochi, and thus its fame as Russia's best resort town has since spread around the world. Long before Sochi hosted the Olympics, this seaside town was a popular summer destination for Russians looking to bask in sunshine and take a dip in the Black Sea. Now, the city attracts a more international crowd, and you can always expect the beaches to be crowded during the summer months and the ski slopes to be busy during the winter months.

Recently, I had the opportunity to take a spur-of-the-moment trip to Sochi. I had been to major Russian cities like Moscow and St. Petersburg before, so I was interested to see how this coastal resort town differed from Russian metropolises. Without hesitating, I jumped at the opportunity. Then, I pulled up my HotelTonight app to book a great last-minute hotel in Sochi. And just like that, I was ready to experience the unique culture and energy of this Russian resort town for myself.

Even though Sochi was the host of the Winter Olympics, this Russian town is certainly better known as a summer vacation spot due to its subtropical climate and its location on the Black Sea. Known as the Russian Riviera, Sochi's long stretch of beaches attracts hordes of sun-seekers every summer. While I didn't necessarily travel all the way to Russia for the beaches (I have access to plenty of great beaches back home), I felt like I needed to lounge on the beach at least one day in order to experience this city like the Russians do. So I rented a beach chair, slipped on my water shoes (the beaches are pebbly here, so appropriate footwear may save you some discomfort) and enjoyed the calm waters of the Black Sea.

Sochi has arguably some of the most unique food in Russia to due its warmer climate, so you'll certainly want to try some local delicacies while in Sochi--and the best place to find some of these local favorites is at the Sochi Central Market. This large, colorful market features rows and rows of stalls, where vendors sell everything from fresh fruits and vegetables to succulent poultry and fragrant flowers. Based on recommendations from locals, I knew that there were a few dishes I had to try while in Sochi: shish kabobs, Khinkali and Khachapuri. I tried every dish recommended to me, and by the end of my time in Sochi I had a handful of new favorite foods.

If you visit Sochi in the winter rather than the summer, you'll probably want to head to the mountains to enjoy some great skiing. As the site of the Winter Olympics, the Caucasus Mountains is now home to a number of luxury ski resorts, so it's a great destination for anyone looking to ski the same slopes that the world's greatest athletes once skied. If you visit Sochi in the summer, like I did, you can admire the beauty of this imposing mountain range by visiting the Caucasus Nature Biosphere Reserve. This nature preserve is Europe's second-largest mountain forest, which is why it has been designated a UNESCO World Heritage site. If you want to breathe in fresh mountain air and wander through untouched natural forest, you won't want to miss visiting the Caucasus Nature Biosphere Reserve.

This microdistrict of Sochi is one of the area's most popular resort destinations, so there are plenty of beaches and great restaurants to enjoy while in the area. Dagomys' most interesting attraction isn't a beach, however, it's a tea plantation. The Dagomys region is the northern-most tea cultivator in the world, and you can learn all about the region's interesting history of tea by visiting a local plantation. During your time in Dagomys, you should taste some local tea at one of the tea houses, where visitors can enjoy a traditional century Russian tea party. There's no tastier way to experience life like a local than by indulging in delicious tea and sweet pastries and jams.

To be honest, I didn't know if I would like Sochi. It didn't seem like a typical resort town I was used to, so I didn't know exactly what to expect during my stay in Sochi. However, this Russian resort town pleasantly surprised me, largely because I was intrigued by the culture and the way of life in Sochi. Despite the fact that it's a warm seaside resort town, it still feels classically Russian, so there's no shortage of delicious Russian cuisine and beautiful architecture. I'm so glad I was given the opportunity to visit Sochi at a moment's notice, and I have HotelTonight to thank for making it so easy for me to book a great last-minute hotel in Sochi in mere minutes. As a traveler who likes to keep plans flexible, HotelTonight has become one of my go-to resources for planning trips around the world.

How many hotels are in Sochi?

There are 34 hotels in Sochi available from Hotel Tonight.

What are most popular hotels in Sochi?

What are the best hotels in Sochi?

How much is a hotel room in Sochi?

What is the cheapest time to go to Sochi?

Our hotels prices have varied throughout the year from $54.48 to $269.05 On average, we've seen the cheapest room prices in October

Which hotels in Sochi have a pool?

There are 20 hotels with pools in Sochi. Some of them are:
Hyatt Regency Sochi
Forward Aparthotel
Casablanca Hotel