Regarded as one of Russia's most dazzling cities, this vibrant, colorful port city is a just as much a delight for visitors as it is for locals. Saint Petersburg is full of opulent palaces, stunning architecture and pretty canals, so you'll never run out of beautiful sights to admire while you wander through this Russian city--I certainly didn't. When I first arrived in Saint Petersburg, though, I assumed I wouldn't like the city as much as I liked Moscow, but Saint Petersburg and its locals quickly proved me wrong.

Saint Petersburg wasn't originally on my itinerary for my trip to Russia, but thanks to some advice from locals and fellow travelers, I made the split-second decision to change my travel plans and head to Saint Petersburg. Since I needed a hotel room at a moment's notice, I pulled up my HotelTonight app on my phone. Within minutes on HotelTonight, I had booked a great last-minute hotel in Saint Petersburg, and I was ready to start exploring this picturesque Russian city in person.

Located in the center of Saint Petersburg is a 19-acre islet called Novaya Gollandiya, or New Holland. This island is officially Saint Petersburg's most popular public space and locals can't get enough of it. Once a restricted island, New Holland is now a public park where locals go to enjoy nice weather, listen to live music, wander through art exhibits and just soak in the feel-good vibes of the Saint Petersburg community. Since I visited in the summer, New Holland was packed with locals, and I was able to get a great sense of the city's atmosphere from a local's perspective.

You can't go to Saint Petersburg without visiting Udelka--at least that's what some locals told me. This massive flea market is one of the best flea markets in the world, and it's a treasure trove of antiques. So if you want to find some truly unique, interesting souvenirs from Saint Petersburg, skip the touristy gift shops and instead head out to Udelka. Even if you aren't looking to do any shopping in Saint Petersburg, you should still consider visiting Udelka just to wander through the stalls and to witness the spectacle of this incredible flea market.

Since Vasilevsky Island is situated across the river from the Winter Palace and St. Isaac's cathedral, it offers spectacular views of Saint Petersburg without the crowds and chaos of tourist sites. This peaceful island is one of Saint Petersburg's most beloved gems, and it's home to exquisite architecture, great museums and even historic colleges. As I walked along the strelka (the easternmost tip of the island), I soaked in the beauty of Saint Petersburg, and I concluded that Vasilevsky is one of the best places in the city to really see the true scope of Saint Petersburg's beauty. It's also one of the hottest spots in the city for dining, as there are a number of great restaurants on the island. I popped into a small restaurant that was packed with locals and enjoyed some authentic Russian cuisine on my first night in Saint Petersburg.

When you're in Saint Petersburg, you simply cannot avoid Nevsky Prospect, the main thoroughfare that runs through the city. This long avenue is a great spot for shopping, dining and entertainment, but it's also home to some of the city's best cultural and historic attractions, such as the beautiful Alexander Garden, the extravagant Stroganov Palace and the old St. Catharine Catholic Church. If you want to get in some sightseeing and some shopping during the same outing, simply head to Nevsky Prospect.

The Moskovsky District, or Little Moscow, is quite different from the exquisite, beautiful area of Nevsky. This district is well organized and clean, but it's also full of Stalin-era buildings, so the architecture feels a bit cold. However, this area is fascinating to visit if you want to get a larger perspective of life in Saint Petersburg. Plus, the Moskovsky District has many great restaurants and nightlife options, so you'll always be able to find something to entertain or excite you in this neighborhood south of Nevsky.

Before arriving in Saint Petersburg, I wasn't sure what to expect of this Russian city. I knew that it would be a bit smaller and less crowded than Moscow, but what I didn't expect was to see so much energy, excitement and beauty in Saint Petersburg. It quickly surpassed Moscow to become my favorite city in Russia, and I was so glad I was able to make my spur-of-the-moment Saint Petersburg trip possible thanks to HotelTonight. The next time I decide to plan an impromptu trip to Saint Petersburg--which, believe me, I hope is sooner rather than later--you can bet that I'll rely on HotelTonight to help me find a great last-minute hotel in Saint Petersburg. 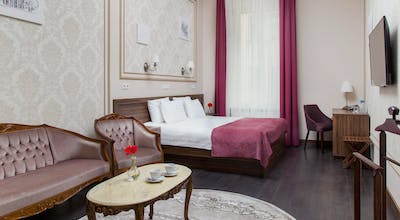