Find a Hotel Tonight in
Fes 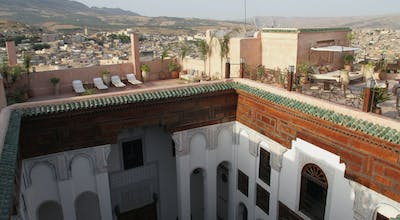 HotelTonight – Plan Your Ideal Morocco Getaway with These Fes Hotels

Fes (also known as Fez) has been nicknamed the "Athens of Africa" due to its thriving medina and its rich history. Fes is what Marrakesh used to be--an authentic, vibrant Moroccan city that still feels largely untouched by modernity. From its dark, narrow alleys to its crowded, chaotic souks, Fes barrages all of the senses, making it one of the most interesting places I've ever visited.

While living abroad in London, I had a craving for some adventure, so I started brainstorming exciting destinations for a quick weekend getaway. I found a cheap flight from London to Fes, and I was immediately sold. After all, I had never been to Morocco, and I wanted to explore the historic city of Fes. To make my spontaneous trip to Morocco possible, I booked my last-minute hotel in Fes on HotelTonight in just a few quick minutes. With my flights and my hotel room booked, I started dreaming of all that I would do and see in the colorful city of Fes.

As I walked through the winding, crowded streets of the Old Medina, I felt like I was in another era. This labyrinth of historic streets seems untouched by time, and it's not hard to imagine that the Old Medina looked and felt the same 300 years ago. Since the medina is a pedestrian-only area, there are no cars and no traffic, except for the foot traffic and occasional donkey traffic. It's easy to get lost in the medina, which is why it's often wise to hire a guide to take you around the area. I never felt unsafe in Fes, but as a foreigner, I always try to take extra precautions when traveling to new cities, which is why I relied on a tour guide for most of my stay. Plus, that way I was able to see much more of Fes than if I had been blindly touring the city on my own.

This enormous, wild market is unlike anything I've ever seen. Talaa Kebira is a market tucked inside Bab Bou Jeloud, and it's full of everything from live chickens to baskets of spices to street food vendors. This main shopping street sucked me in immediately with its beautiful jewelry and ceramics and its fragrant spices and colorful clothes. If you want to pick up some great souvenirs during your stay in Fes, this street is one of the best places to shop. Just be sure to put your haggling cap on so that you can score the best deals possible on this lively market street.

If you're fascinated by history like I am, you'll want to visit one of the old madrasas in Fes. These historic schools can be found all over Fes, but the one I visited was near the Qaraween mosque. I paid a small fee to enter the madrasa so that I could see the stunning architecture and exquisite decor of this old school, which was once one of Fes' best colleges. From the intricate design of the building to the history of the madrasa, this old site was one of my favorite spots in Fes.

If you want to see the true scope of Fes, you should consider taking the hike up to Mount Zalagh. At the top of this mountain, you will have sweeping views of the historical city below you, and you'll be able to grasp just how large Fes really is. When you're inside the crowds and the chaos of Fes, you can't really get a good sense of the layout of the city, which is why it's helpful to view the city from above. Plus, this hike is a great way to get in some extra exercise for the day--and you'll need it when you start eating all of the delicious tagines and couscous found all over Fes.

When I first arrived, I was overwhelmed by the hustle and bustle of Fes, and I wondered if I was in a bit over my head. Fortunately, it didn't take me long to slip into a groove with the city, and before long I had become enamored with the energy and excitement of Fes. In less than a few hours after arriving in Fes, I knew that this would be one of my most memorable trips ever, and I have HotelTonight to thank for making it so easy to book great last-minute hotels in cities all over the world.

How many hotels are in Fes?

There are 22 hotels in Fes available from Hotel Tonight.

What are most popular hotels in Fes?

Among our most booked hotels in Fes are:
Tghat
Riad Fès - Relais & Châteaux
Barcelo Fes Medina

What are the best hotels in Fes?

How much is a hotel room in Fes?

What is the cheapest time to go to Fes?

Our hotels prices have varied throughout the year from $31.56 to $273.76 On average, we've seen the cheapest room prices in December

Which hotels in Fes have a pool?

There are 12 hotels with pools in Fes. Some of them are:
Palais Faraj Suites & Spa
Hotel Sidi Harazem
Riad Arabesque