Find a Hotel Tonight in
Valemount 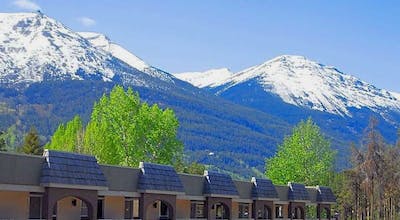 If you drive around in British Columbia, Canada, it's easy to find yourself completely lost in the landscape. This is a massive piece of land, but surprisingly it's only the fifth largest province in Canada despite the fact that it's larger than California. I travel to BC often for business, and while most of my time is spent in beautiful Vancouver, I've taken to venturing out a bit more on recent trip to see what there is to see up here. In short, there is so much to see and experience that one could spend years there and not come close to experiencing everything. On my last trip, I decided to stay through the weekend after my work on Friday was done. I wanted to see the eastern portion of the province and I wanted to get out in nature, as is my wont wherever I am. I chose to make the drive to a community called Valemount. It's not very well known by the general public, but a BC lifer told me it was a place I needed to see. I wasn't worried about finding a Valemount hotel room ahead of time, as HotelTonight would book one for me when I was ready.

There is a lot of water in this beautiful town of just over 1,000 people that's surrounded by mountains. The iconic Fraser River runs through it, and I wanted to have some fun with it. I stopped at a local tackle shop and got myself a fly rod and all the gear, as I love to fish. Within minutes, I was pulling up rainbow trout that I would have been thrilled to take home and cook myself if I was anywhere near where I live. Regardless, it was a thrill to catch and release them for most of the morning.

After spending some time on the river, I wanted to move my legs a bit. There are all sorts of different trails in and around Valemount, and some are better suited for horses. I chose more of a hiking path, and I spent a lot of time walking along the river, up through some extremely green hills and back through tree cover that seemed almost like a blanket because of its thickness. I took dozens of different photos, although I was resigned to the fact at the time that I'd never be able to do this scene justice.

I had been thinking about that trout that I was pulling up all day, and I wanted to taste it for myself. I asked some locals in town where I could find such a dinner, and they pointed me to an understated restaurant right in the middle of town. Sure enough, they had fresh rainbow trout on the menu, and yes, it was as delicious as I had hoped it would be. It was thick, juicy, and it had that little taste of the wild that makes it so unique.

HotelTonight – Valemount Hotels in BC

I was full, happy and tired after an active day. I opened my HotelTonight app and booked a Valemount, BC hotel room near me. I made my way there, as it was only about a block away, and I think I was asleep before the lights were out. I couldn't wait to tell people about this place.