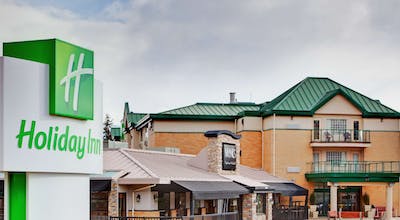 When I thought of British Columbia before I saw it for the first time, I thought it was a vast, mountainous region from one border to the other. After I took a job that sent me to BC regularly, I found out I was only partially correct. There are mountains in the western and eastern portions of this enormous province, but there is also a vast valley that runs through the middle of the territory. I had driven through this part of Canada more than once, and it's called the Okanagan Valley. I had stopped many times for gas and a quick bite to eat in places like Kelowna, Penticton and Vernon, but I'd never spent any real time there. On my last work trip to BC, I got a call as I was on my way to meetings that started in the morning and ran all day. The caller told me that the meetings were canceled, so suddenly I had 24 hours to myself. I was going to explore this valley. I wasn't worried about finding an Okanagan Valley hotel room, as I always travel with HotelTonight. My favorite travel app would find me a room when I needed one.

The Okanagan Valley basically exists in a desert climate, so I didn't expect to see all of the fresh food available when I pulled into Kelowna to start my day. I saw dozens of different roadside fruit and vegetable stands, and I had to stop and sample a bit of the local fare for myself. I had a peach that was as big as a softball and as juicy as a fresh watermelon, and I bought a bucket of fresh cherries ready to travel with me, but I wound up finishing most of them. This is a fertile farming area, which was a surprise to me.

The communities in this part of BC are all built around Okanagan Lake, which is an enormous body of water that provides communities not only with a valuable resource, but also with seemingly unlimited options for fun. I stopped in two places where I found unexpectedly pristine sandy beaches, and I couldn't even count all of the kayakers, swimmers and sun-bathers who were out enjoying the warm weather of the late summer. I took dozens of photos of the mountains that surround the valley, which were stunningly majestic.

After getting a little taste of what the Okanagan Valley had to offer, I was ready for some local, farm-to-table options. I heard about one on one of the beaches, and it wasn't far. I stopped in and immediately ordered a glass of local wine with a salad and a steak. The salad was enormous and packed an incredible amount of flavor, as it was filled with locally-grown greens, tomatoes and radishes. The steak was scrumptious as well, and the entire meal was a pleasure. They do fresh food right there.

HotelTonight – Okanagan Valley Hotels Near Me

I was full, tired and ready for some sleep. I opened the HotelTonight app on my phone and booked an Okanagan Valley hotel room within a few swipes. It wasn't far from where I was, as that's how HotelTonight works, so it wasn't more than a few minutes before I was in my room and comfortably asleep.

How many hotels are in Okanagan Valley?

There are 2 hotels in Okanagan Valley available from Hotel Tonight.

What are most popular hotels in Okanagan Valley?

Among our most booked hotels in Okanagan Valley are:
Stone Bridge Lodge
Big White Vacation Homes

What are the best hotels in Okanagan Valley?