Find a Hotel Tonight in
Chilliwack 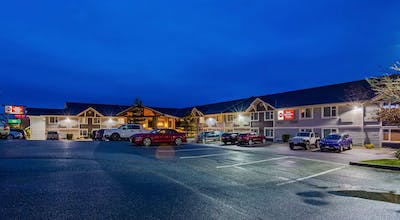 British Columbia, Canada is one of the more interesting places on the planet. I speak with a level of experience, as I have traveled across the globe throughout my professional life. BC, as it's commonly known, is unique in my opinion because I don't think there's any other place out there where the totally wild and the completely modern mix in such proximity and so seamlessly. I've spent time in Vancouver, which is about as cosmopolitan as it gets, and the wilderness of northern British Columbia, which is about as remote as it gets. What I hadn't done until recently was spend some time in a place that was somewhat of an "in-between" locale. On my last business trip to Vancouver, I decided to find and take advantage of that opportunity. I managed to carve 24 hours out for myself, and I was going to explore a new place. I wanted to see Chilliwack, as I had heard it was quite interesting. I wasn't concerned about finding a place to stay, either, as I always travel with my HotelTonight app. I'd book a Chilliwack hotel room near me as soon as I was ready to get some sleep.

You could drop me anywhere in British Columbia and I'm going to be mesmerized by the landscape that surrounds me at any given moment. That's why I was thrilled to arrive in Chilliwack and see that there were more hiking trails than I could possibly count. I wanted to see the city itself, so I chose a trail that took me to place where I could get a view of it. It was a good choice, as it wasn't long before I was looking down on a skyline with the breathtaking landscape surrounding it as if I was looking at a work of art.

There are actually several different lakes near the city, but the one that shares a name with the community is the one that I wanted to see. It's situated at the mouth of the river that also shares the Chilliwack name. Simply put, the lake is stunning. It seems to cut a swath through green mountains that surround it, and on the day I was there it was covered by a grey-white mist that gave the entire scene a surreal feel. I know I'd be very happy to live near natural beauty like this place.

After spending nearly the entire day outside and walking around so much, I was more than ready to have a big dinner. I spoke to a few people during the day and they told me about a pizza place that had earned a loyal local following. I gave it a try and was immediately glad that I did. The pizza's crust was relatively thin, but the cheese was delicious and the toppings were incredibly fresh. I ate way more than I should have, but I was happy to do so.

HotelTonight – Chilliwack Hotels Near Me

How many hotels are in Chilliwack?

There are 6 hotels in Chilliwack available from Hotel Tonight.

What are most popular hotels in Chilliwack?

Among our most booked hotels in Chilliwack are:
Hampton Inn by Hilton Chilliwack BC
Comfort Inn
Harrison Beach Hotel

What are the best hotels in Chilliwack?

How much is a hotel room in Chilliwack?

In the last 30 days, HotelTonight prices in Chilliwack have been as low as $68.54, though the average room costs closer to $68.54 per night.

What is the cheapest time to go to Chilliwack?

Our hotels prices have varied throughout the year from $46.07 to $91.07 On average, we've seen the cheapest room prices in December

Which hotels in Chilliwack have a pool?

There are 4 hotels with pools in Chilliwack. Some of them are:
Coast Chilliwack Hotel by APA
Hampton Inn by Hilton Chilliwack BC
Harrison Beach Hotel